(Effects of Authentic Science on Youth Expectations about Science)

Scientific Tools and Methods: Brown et al. (1989) articulate the view that authenticity is coupled to use of scientific tools and methods, asserting that disciplines such as science or mathematics comprise distinct cultures and that “conceptual tools … reflect the cumulative wisdom of the culture in which they are used” (p. 33). They go on to say, “Authentic activities then, are most simply defined as the ordinary practices of the culture.” In this view, students are engaged in authentic scientific work when they are doing what scientists do.

Science Professionals’ Interest in Outcomes: This second conception of authenticity emphasizes the degree to which the work by students and teachers is useful to science (Bonney et al., 2009; 2014).  The key issue with regard to schools and student learning is what the student thinks of this: Is being part of a larger project with potential scientific impact important to the student, even if what the student is doing is mostly counting things, cleaning equipment, or providing other kinds of assistance?

Value to Community: In rural settings, “school learning” is often seen as preparation to leave the community (Corbett, 2007). Students with strong familial or cultural connections to place and community can experience substantial internal conflict if they see schooling as preparation for leaving or feel that the learning required to live and work in the community comes from places other than school (Howley & Hambrick, 2014). As evidenced in the “Community Shellfishing Support” project, we conjecture that scientific work directed toward addressing issues important to the place where they live has the potential to help students struggling with the connection between learning and place see new meaning in science learning.

Personal Contribution: Drawing upon work by van Eijck and Roth (2009) and others, the fourth conception of authenticity asserts that it is the student’s perception that he or she has made a personal contribution to the project, tied to his or her identity or special capabilities, that makes the work authentic.

Conceptual Model: The figure below (click on the figure for a larger version) illustrates the conceptual model that we have developed to connect authentic science learning to factors that differentiate different groups of students (on the left) and outcomes of programs such as ours (on the right). 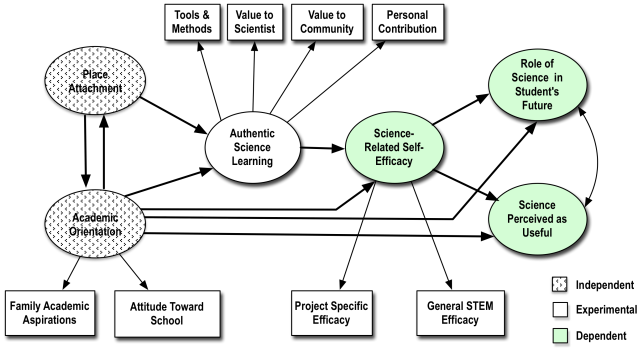 Analysis in future years, involving many partner organizations and to collect perceptions from hundreds of students, will use structural equation modeling (Maruyama, 1998; Schumacker & Lomax, 2010) to assess the relative contribution of the conjectured relationships  to the outcomes. This past year we focused on collection of data to assist in refining the survey instrument and developing an understanding of the relationships within the model.

Results from the past year’s analysis with small numbers of students suggest that:

These early results increase our commitment to undertaking this research since they tend to confirm our conjecture that developing a better understanding of how different groups of students respond to different aspects of authentic science learning projects will be important to effective and economical design of such projects.